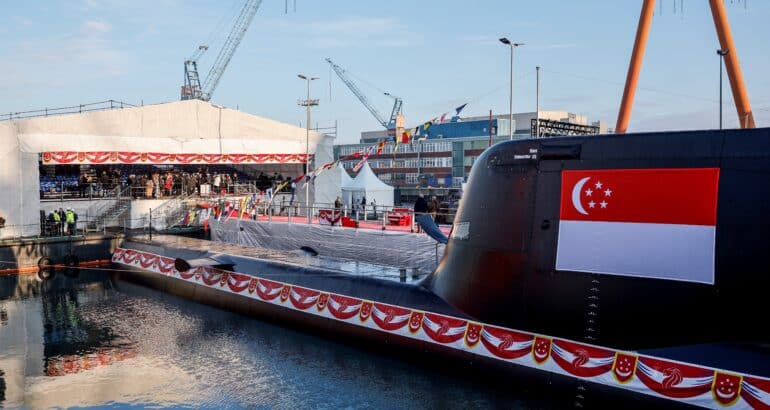 Two state-of-the-art submarines for the Republic of Singapore were launched in a festive ceremony at the thyssenkrupp Marine Systems (TKMS) shipyard in Kiel on December 13, 2022.

“Impeccable” and “Illustrious” are the second and third boats in a series of four Type 218SG submarines for the Republic of Singapore Navy.

Among the 350 guests invited to the event were German Chancellor Olaf Scholz, Singapore’s Prime Minister Lee Hsien Loong, Minister for Defence Dr. Ng Eng Hen and other high-ranking representatives of Germany and Singapore. Lady Sponsor of both vessels was Ms. Ho Ching, wife of the Prime Minister. At the push of a button, she launched both boats simultaneously, giving them the sonorous names “Impeccable” and “Illustrious”.

“We can be proud that German companies like thyssenkrupp Marine Systems are leaders in the construction of submarines,” Chancellor Scholz explained in his speech. “Each of these submarines … is a one-off with a lot of manual work and maximum precision. That is a clear signal. … And I am therefore also extremely pleased that thyssenkrupp Marine Systems will expand its production in Germany and will also start production at the Wismar site from 2024.”

Prime Minister Lee stated: “Our collaboration on this strategie capability underscores the depth of partnership and the trust between our navies and our defence industries. I am confident that the relationship between Germany and Singapore will grow from strength to strength, and I look forward to more meaningful interactions between our militaries.”

“The partnership with Singapore is of strategic importance for Germany and thyssenkrupp,” said CEO Oliver Burkhard. “The boats launched today belong to a new, state-of-the-art generation of submarines that is truly unrivalled in the world. The technologies being applied are world-leading. This is also only possible thanks to the long-standing, trusting and successful cooperation with the Republic of Singapore.”

The “Impeccable” and the “Illustrious” are the second and third boats in a series of four Type 218SG submarines ordered by the Republic of Singapore Navy. They are among the most modern diesel-electric submarines in the world and feature numerous customized solutions and new technologies. They are designed with a low acoustic signature. The external air-independent propulsion system allows the boats to remain under water for a longer duration. With a length of approximately 70 meters and a displacement of around 2,000 tons, they are currently the largest submarines ever built at Marine Systems. Once further intensive trials have been conducted, the “Impeccable” and the “Illustrious” will be handed over from 2023 onwards.

Following the double naming ceremony, thyssenkrupp Marine Systems and Singapore-based ST Engineering signed a teaming agreement. It formalizes and strengthens the long-term cooperation between the two companies. The agreement covers both warranty services as well as in-service support for the four Invincible-class submarines, ensuring that they are well maintained in Singapore during their operational lifetimes.