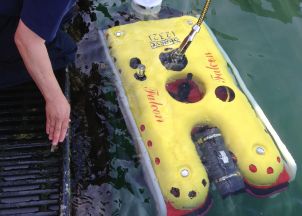 Finding an underwater victim within 60 minutes determines whether a mission is a rescue or a recovery. Seawork exhibitor Saab Seaeye (stand B95), together with the Los Angeles Long Beach Fire Department, is offering fresh hope.

The joint initiative hopes to cut the search time from an average of three hours to less than 30 minutes, using a cleverly modified Falcon ROV that can rapidly sweep the area.

Pinpointing a victim on the seabed in dark and murky waters, with only a vague idea of where they entered the water, has long been a frustrating and time-consuming operation – as soft tissue can only be detected at short range by very high-resolution sonar.

Finding a faster solution using ROV-mounted sonar seemed impossible, as the kind of high-resolution sonar system able to detect soft tissue is too large and heavy to be mounted on an ROV small enough for rapid deployment.

Although Saab Seaeye’s Falcon was the ideal ROV, both in size and technological resources, the team were faced with the problem of trying to fit a metre-long sonar device onto a metre long ROV.

The ingenious solution was to split the sonar unit in two: the sonar head was fitted to the rear of the Falcon, with the electronics pack squeezed inside.

Yet this was only half the answer, as the weight of this kind of sonar would normally sink or destabilise a small ROV.

First, Saab Seaeye engineers managed the buoyancy of the ROV to make it stay afloat and remain stable for accurate sonar scanning. Second, they found the Falcon’s five powerful thrusters could handle the weight and manoeuvrability, whilst working in currents and deep water.

“We wanted something that was not too expensive,” explains Stan Jackson of the Long Beach Fire Department, “but could handle the technology, and work in confined spaces and out in the ocean. And also something we could get going quickly.”

An ROV doesn’t need to see in the dark, it can work tirelessly and can recover the victim with its manipulator.

Its power, manoeuvrability and intelligent electronics, along with an ability to fit a wide selection of tools, cameras and sensors, has made it one of most successful ROVs in the range from Saab Seaeye, the world’s largest electric ROV manufacturer.