SAVING YOUR LIFE…IS OUR LIFE! At BriarTek, Inc. we understand that mere seconds can be the difference between life and death – that’s why we have dedicated our lives to producing the highest quality man overboard alarm and recovery systems.

When your life is at risk, you need the best industry has to offer – the ORCA family of lifesaving equipment. You have the assurance that we understand that saving your life…is our life!

BMT provides independent technical expertise and consultancy. We offer design solutions, asset management, programme delivery and technology services to customers in the defence, security, transport, energy and infrastructure markets. Our team thrive on tackling the most complex engineering and programme challenges, and are adept at blending capabilities from the entire spectrum of engineering disciplines to deliver enduring and value-adding solutions.

With an unparalleled understanding of operational contexts and the need for safe, capable and available fleet assets, BMT has an extensive track record of successful SMERAS projects which demonstrates the depth of our experience in safety and environmental management, safety assurance, engineering, through life support planning and architecture.

Our reputation and expertise is recognised by defence authorities in the UK and overseas including Europe, North America and Asia Pacific. As a core member of the UK industry team in particular, we have been providing submarine engineering, safety and project support to the Royal Navy (RN) nuclear submarine flotilla for over 20 years. Broader still, we have access to a vast array of skillsets, including systems engineers, naval architects, marine engineers, safety and environmental risk consultants, supportability, cost engineers and software developers, making no defence challenge too small. 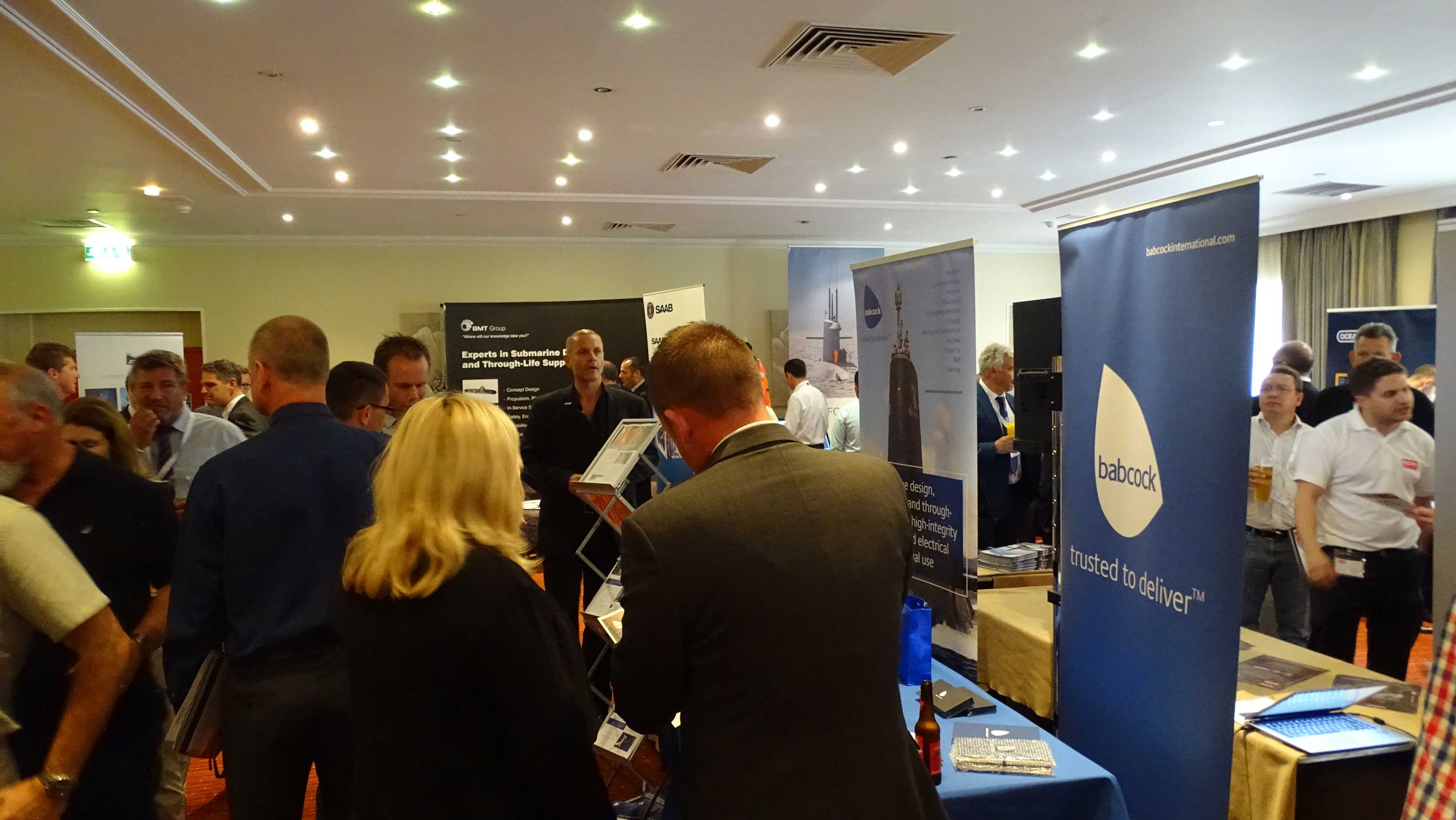 Babcock International Group – Marine & Technology once again PRIME SPONSORS for the NATO Submarine Escape and Rescue Working Group (SMERWG) which proved to be a great success.  The NATO Chairman of SMERWG sent thanks to all from Babcock who were involved in the sponsorship.

The company which runs Devonport Dockyard has won a £15million contract as part of Government deals to design the next generation of nuclear deterrent submarines.

The first Successor submarine is due to be delivered in 2028, replacing the Vanguard Class submarines which currently carry the UK’s nuclear deterrent – Trident, and part of the replacement work will be carried out by Babcock.

Babcock has been asked to design part of the in-service support for the new submarines.

Although a decision on the final design and build will not be made until 2016, detailed work has to take place now to ensure that the Successor submarines will be the most technologically advanced, to protect national security.

Contracts have been awarded to BAE Systems, Babcock and Rolls-Royce, sustaining or creating 1,900 jobs at sites across the UK. Engineers at the companies will work with the MOD on the design of the new submarines which will use a new nuclear propulsion system.

Defence Secretary Philip Hammond said: “This government is committed to maintaining a continuous submarine-based nuclear deterrent. The contracts announced today with BAE Systems, Babcock and Rolls-Royce symbolise an important step towards renewing our nation’s nuclear deterrent into the 2060s.

“We have a world-class submarine-building industry in this country and this programme will help to sustain or create more than 1,900 jobs across the UK.

“By making the core equipment programme fully funded and affordable, we are able to confirm additional equipment projects which help safeguard our national security.”

The largest contract, worth £328m, has been awarded to BAE Systems Maritime – Submarines, which will work on the overall submarine design.

Babcock has been awarded £15m and will focus on designing parts of the in-service support. More than £4m has been paid to Rolls-Royce, which will be responsible for the integration of the reactor design.

The First Sea Lord, Admiral Sir Mark Stanhope, said: “The Royal Navy has been operating continuous at sea deterrent patrols for more than 40 years and the Successor submarines will allow us to do so well into the future with cutting edge equipment.”

In May 2011, the MOD announced approval for the design phase, costing £3bn. The contracts announced today are part of that investment.

These are contracts for the design of the Successor submarines, not the missiles that they will carry.

As part of the coalition government agreement, a review is being carried out into alternative systems for maintaining a credible nuclear deterrent.

Every submarine film has that moment. The moment when a torpedo is launched towards the submarine. There’s the tension. The panicked looks. The pings of the sonar. The focused concentration. And someone, always, ends up shouting ‘Dive! Dive! Dive!’ as the submarine takes evasive action.

While evasive manoeuvres are important for avoiding torpedo attack, for the past decade or so, the marine defence sector has been developing anti-submarine countermeasures. These are devices that can be launched from the submarine to trick the torpedo’s tracking system into following them, rather than the target.

Silver bullet: in basic terms, the launcher is a compressed-air catapult

However, finding ways to launch these devices has proved rather difficult. A team from Babcock has now come up with a new type of launcher, designed with safety as a priority, which can be retrofitted onto the current submarine fleet to provide an extra layer of protection against a form of attack that all submariners hope will never come.

Torpedos hunt acoustically, explained Jeff Owens, future business director for Babcock’s Marine and Technology Division. ‘If there’s a torpedo coming towards you, you want to put a countermeasure in the water that “looks” very much like you do from the torpedo’s point of view, so that you can then quietly move away from the torpedo,’ he told The Engineer.

It does this by emitting a sound signature that convinces the torpedo’s guidance system it should follow the countermeasure rather than the submarine. ‘The idea is that it looks more like you than you do,’ Owens said. ‘The countermeasure will move into clear space; so if you’re deep, you set the countermeasure to go shallow, so the torpedo will explode above you while you skulk out of the way.’

However, a lot of submarines don’t have the capability to launch countermeasures, partly because it takes such a long time to design and build submarines. ‘They’ve been introduced over the past decade, but the cycle time is so long that that’s recent, really,’ Owens said.

Full artillery:a submarine might need up to 20 launchers loaded and ready to launch

Some submarines have internal launch systems, positioned inside the pressure hull and shooting their armaments through the outer casing, but these systems aren’t suitable for countermeasures.

‘One of the issues is that you need a lot of launchers,’ Owens explained. ‘When a modern torpedo comes towards you, it instantly starts trying to decide whether it’s following a decoy or a real submarine, so a single countermeasure isn’t sufficient: you need to send out several, either at the same time or in a sequence. And these launchers have to be loaded at all times, because you only have seconds to react when a torpedo is launched. If one comes from a helicopter, you’ll hear nothing, then a splash, and you have to respond in seconds.’

Depending on how many countermeasures a commander might want to launch to try to fool a torpedo, a submarine might need to have up to 20 launchers loaded and ready to launch. ‘There haven’t really been any suitable systems for this,’ Owens claimed. ‘There were some external launchers that sit outside the casing, but they tended to use pyrotechnic charges to launch and we found that customers weren’t at all comfortable with that, from a safety point of view.’

The solution that Babcock has developed is a launcher system that sits under the submarine’s outer casing but outside the pressure hull. This makes it relatively easy to install, because the pressure hull itself does not need to be pierced and then repaired.

High pressure: the solenoid valve releases air from the reservoir into the piston tube

The system is controlled by a solenoid valve. ‘When the launcher is operated, the solenoid opens and the air from the reservoir is released into the piston tube. The piston pulls the cable, which in turn pulls on the pusher device in the launcher tube, and the stored countermeasure is hauled out of the tube and into the water. The launch air is kept within the system, so there’s no release of gas into the water; this maintains the submarine’s stealthy acoustic performance and helps it escape.

Part of the design exercise was to ensure that the compressed air stored enough energy to accelerate the countermeasure from stationary to a sufficient exit velocity in a single stroke, Owens said. The system also had to incorporate other features, he added; launching the device had to be a single operation, so sub-systems had to be included to flood the launching tube before the compressed air is released. As the launcher is located outside the pressure hull, the mechanisms in the launch tube also had to cope with whatever water pressure the submarine could encounter. ‘We had to find a solution that would keep the store dry when it wasn’t being used,’ Owens explained. ‘After all, you really hope that you’ll never have to use one of these. But you don’t want to have to spend time adjusting settings to cope with water pressure, so that’s automatic.’

Babcock used a model-based design approach for the launcher, using a digital model to simulate the physics of the launch system. This, Owens explained, was a way of reducing risk in the design process: the model allowed the teams to identify and quantify the stresses the system would encounter and have to overcome throughout the various stages of the launch process. The model was used to appraise concept designs, to understand the trade-offs that would be necessary to make the concept into a reality and to estimate the key design parameters.

‘The model-based system incorporated mathematical modelling, which we’ve used for a long time,’ Owens said. ‘But the implementation of that modelling went much further in this project than anything we’ve done before.’

The device had to be scalable, to take a range of device sizes from 85mm in diameter to a 200mm-diameter, device. ‘It had to be lightweight,’ Owens said. ‘We had some problems with the dynamics and the structural integrity of the cable, and there were issues with the composite tubing and its behaviour under the water pressures it would encounter at depth.’

For these problems, Babcock’s dedicated testing facilities were invaluable, Owens said. ‘We can test at depth on land,’ he said. ‘That helped us considerably when we were tackling these issues.’